直到周五美元依然没恢复 - 投资者在美国弹劾的背景下积极地记入资产。
The dollar hasn't come round to the end of the week - investors actively ran away in assets against the background of the American impeachment. Euro trades higher than expectations against the background of inflation growth. Results of investigations in the USA will be a major factor of pressure upon the markets within several weeks.

Instead of the promised prosperity, the market has got the next political collapse. Charges of Trump gradually take the form of local accident, but the market has especially begun to panic after Mueller's appointment to the special prosecutor's post on the investigation of Trump`s communications with the Russian Federation. The committee on supervision and state reform of the lower house of the Congress has demanded from FBI and the Ministry of Justice to provide all records of meetings of Trump and Komi not later than May 24.

Last week Trump was once again convinced that the president's post is not a royal throne, and for implementation of the decisions, he needs a consent of other representatives of free democratic society. The system of legislative counterbalances (Montesquieu's idea about the division of the authorities) limits enough a role of the president in the USA – colleagues dictators may envy.

According to the president, the American currency doesn't cope with the duties (the solution of problems of trade deficiency, employment and protectionism), but political attempts to correct «too expensive» course have created problems to large American business.

If investigations of committees of the Congress (at worst) can lead only to an impeachment, then criminal prosecution in the relation of both Trump, and his confidants can be a result of an investigation of Mueller.

Even Ben Bernanke considered necessary to express concerning the influence of political shocks in the financial markets. He considers that the market ignores the tax and budgetary fight since 2007, and the plans of FRS to begin the reduction of the balance ($4,5 trillion), will inspire on repetition of «a convulsive hysterics», which has caused a surge in profitability of bonds and kickback of the stock market in 2013.

Experts unanimously claim that Trump`s policy was a failure in the first hundred days of the board. However, the markets can apprehend acceptance of tax reform as a positive, and the dollar can well grow on it.

Rumors that the ECB is ready to hint in July about the fast beginning of closing of the program evroQE aren't confirmed yet. The current situation in the eurozone doesn't give the grounds for steps of the ECB in the direction of increase in interest rates. Draghi has once again declared that risks for the prospects of growth of the eurozone move to balance, but are still displaced towards decrease. On Wednesday the report of the ECB on financial stability is planned, which Draghi doesn't imaging without low profitability of state treasury bills of the problem countries, and methods of its achievement without the introduction of eurobonds are limited to the QE program.

Before the fatal decision of the Eurogroup on May 22, the parliament of Greece has approved all necessary decisions for the new aid program, but Tsipras considers that they will be executed only in case Greece receives debt relief. Athens can quite get access to the QE program of the ECB that will be an unconditional positive for euro, but strong growth on this news isn't expected.

Last week the pound tried to disprove opinion that the shell twice in one shell crater doesn't fall − trade robots have been accused of a prompt collapse of GBP/USD in several hours after data on retail trade. Actually, the reason was the British importers quite comfortably feel at the level of 1,3 and above, therefore, sales of pound within operations of hedging can be considered natural.

The rally of GBP/USD isn't confirmed by macrostatistics, the closing of short speculative positions, in addition to policy, was its main driver. Theresa May still promises to reduce inflow of migrants to the country. To lower desire to employ foreigners, conservatives intend to oblige the British companies to pay more for the hiring of foreign labor, and migrants will have to do higher contributions to the NHS system.

OPEC has held a series of the closed meetings with hedge funds and petrol traders, but it isn't possible to stimulate an increase in prices yet and to reduce the surplus of the offer in the oil market. The forthcoming week the summit of OPEC on May 25 will be the center of attention. The agreement between Saudi Arabia, the Russian Federation and Iran on the extension of the agreement for 9 months has been reached. The increase in the amount of reduction of oil production is expected, because of accession to the agreement of other countries out of OPEC. Oil can give short-term growth.

We will shortly note:

The market regarded Friday rollback of USD as an opportunity for the elimination of longs, and it means that the dollar will be further subject to bear risks. On Wednesday FRS is going to publish the protocol of the last meeting and if they found hints on the readiness of the regulator for the smooth increase in a rate this year, the dollar can attract the interest of buyers. Next week it is worth paying attention to GDP of Germany, Britain and the USA, the PMI indexes of the eurozone and the USA. 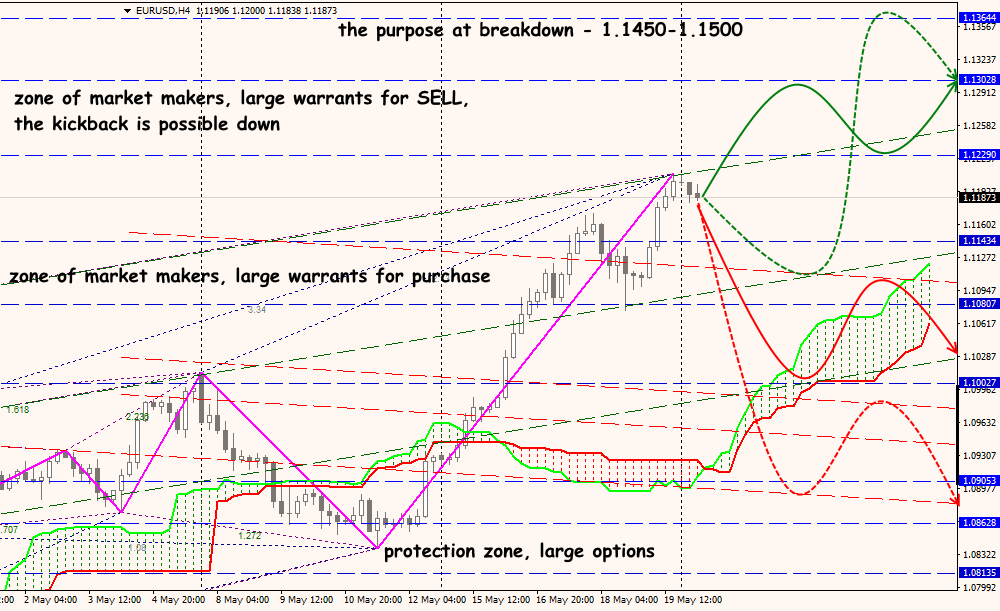 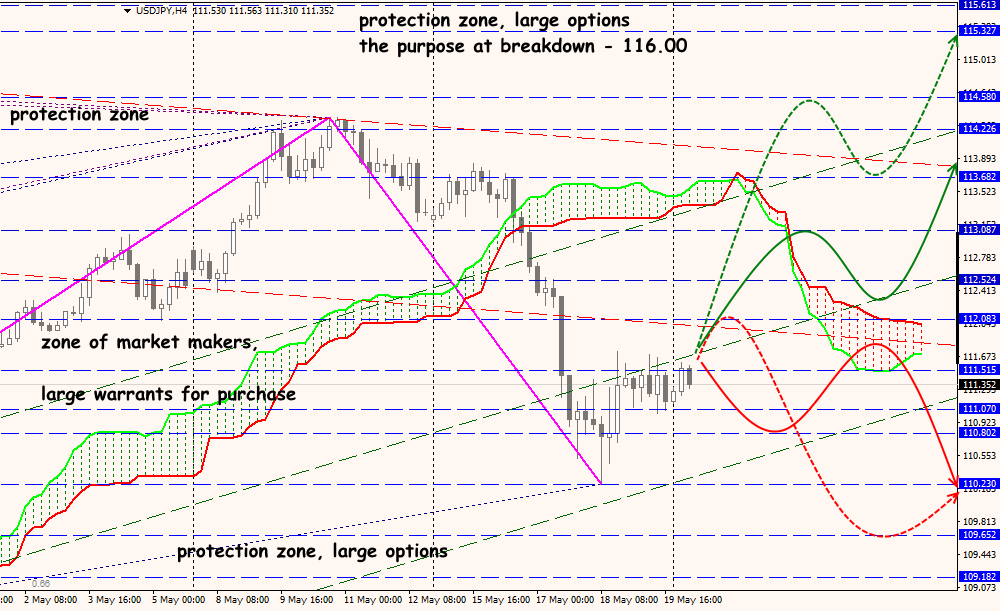