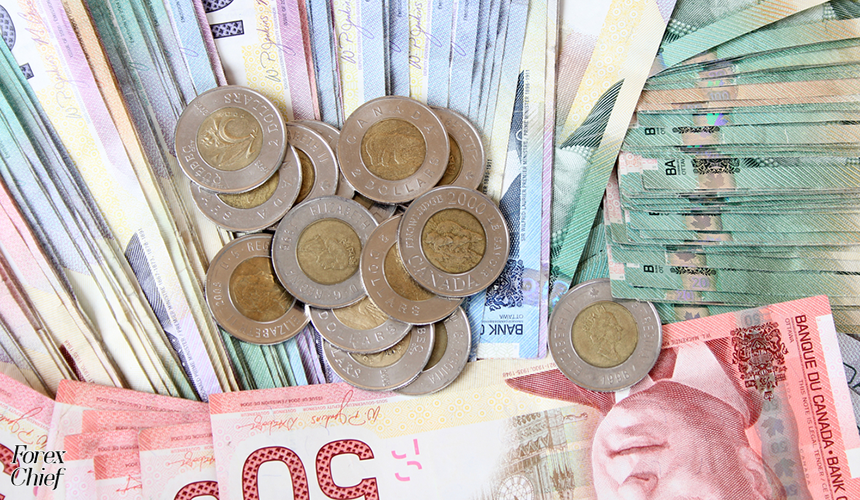 Fibonacci Forex strategy traditionally means that the first max/min is not the most optimum point to start setting up Fibo grid. It is recommended to find at least small double top or a double bottom in a zone where the current trend begins, and it is necessary to construct Fibo levels from the second key point.


The theory of a golden ratio explains a set of natural forms and phenomena, and, therefore, is actively used for the forecasting of numerical ranks of any kind. In the financial markets Fibonacci Forex indicators are used for determining the most probable moments of retracement and the target levels, and highlighting these levels directly on a price chart. Accurate mathematical calculation formula enables Fibonacci's indicators on Forex to be independent of any asset type, the period of calculation and other market parameters.

Nowadays technical tools based on Fibonacci numbers are included in a standard set of any trade platform. Fibonacci lines, expansions, arches, a fan and temporary zones are commonly applied, but the first and the second indicators are the most widespread. The purpose of Fibonacci trading is to determine the depth of the possible correction, the retracement or continuation of a trend, price levels for setting up Fibonacci reasonable stop losses and for taking the optimum profit. Therefore, the correctness of setting Fibonacci lines plays a major role in the calculations. We will further remind the basic principles of drawing up Fibonacci lines.

How can Fibonacci be used in Forex? On the upward trend the lowest point should be chosen as the starting one and further we will move up to the point where the current trend is being corrected at the moment. On the downward trend we choose the most upper point (a start of motion down) and we move to an expected point of the beginning of correction.

Fibonacci can be used in Forex approximately in such a way:

For the Fibo lines to be drawn precisely there is a need for confident practical skills, namely an ability ‘to see’ the most significant price points on the graphics and to build trend lines correctly.

Usually Forex trading Fibonacci assumes that where the price reaches the target levels or an obvious retracement takes place, the constructed grid can just be ‘adjusted’ to new extremes. Fibo levels will not be redrawn when a timeframe changes. Therefore the good result is yielded by setting up several grids of the lines - from the large timeframe to the smaller one. Then it is possible to perform the possible intermediate corrections within a global trend more precisely. Coincidence of the Fibo levels constructed on the various periods makes such price level especially strong.

The trade methods stated below with the focus on the levels cannot be used as full Fibonacci Forex trade strategies, these are just trade schemes, reliability of which can be checked by the reader independently.

The technique uses high probability of the first 100% recovery of the price after a previous strong trend that proves that there is a possible retracement after a new extremum and an emergence of a strong new tendency. Fibonacci strategy more often uses such signal on opening of transactions against an ‘old’ trend. 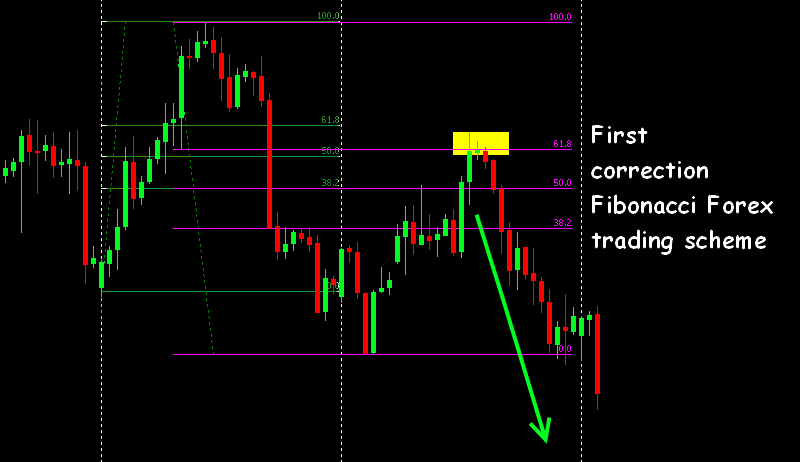 If there are no speculative bounces, then movement of the majority of assets in the lines interval 0%-38.2% and 61.8%-100% represents quite precise parabola. It gives the chance for opening of the breakdown transactions: after an exit from the range of 38.2%-61.8% the probability of the strong movement in a zone of the previous extremum is high. 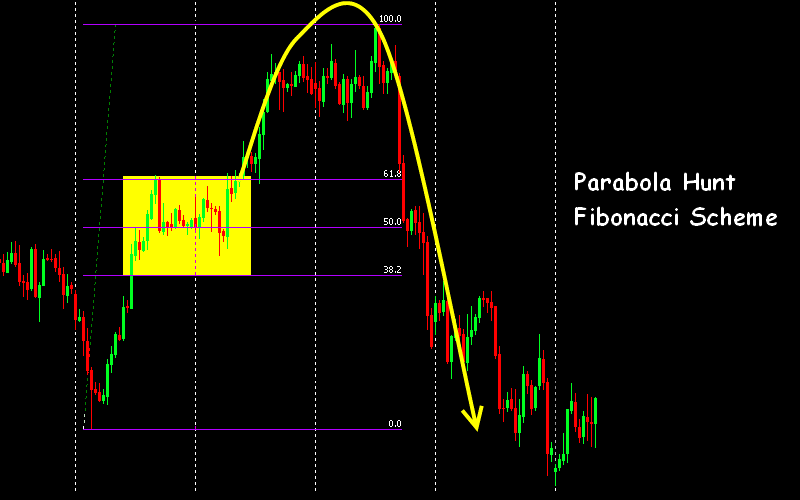 If someone constructs Fibonacci grid so that the range of a gap ‘is located’ around 38.2%-61.8%, then the level of 100% will show a final point of movement in the case of the movement continuation in the direction of a price gap. 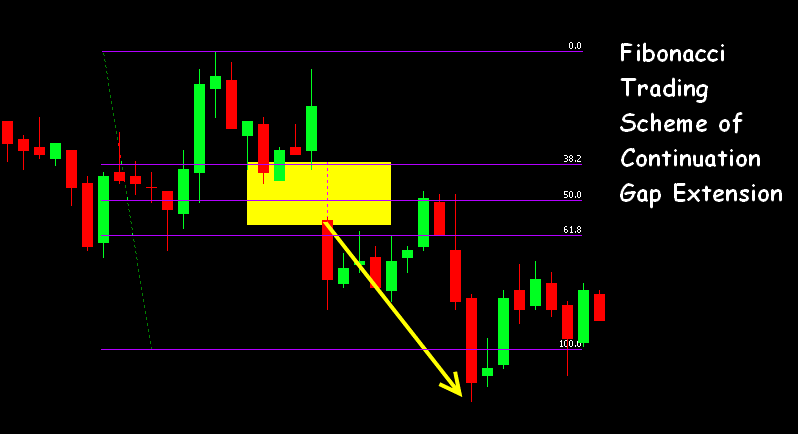 This Forex Fibonacci system is applied only to volatile assets. Fibo grid is drawn up from max/min of the last trade hour of session till min/max of the first trade hour of the next day. The received levels are treated as strong indicators for intraday trade with small profits and close stops. 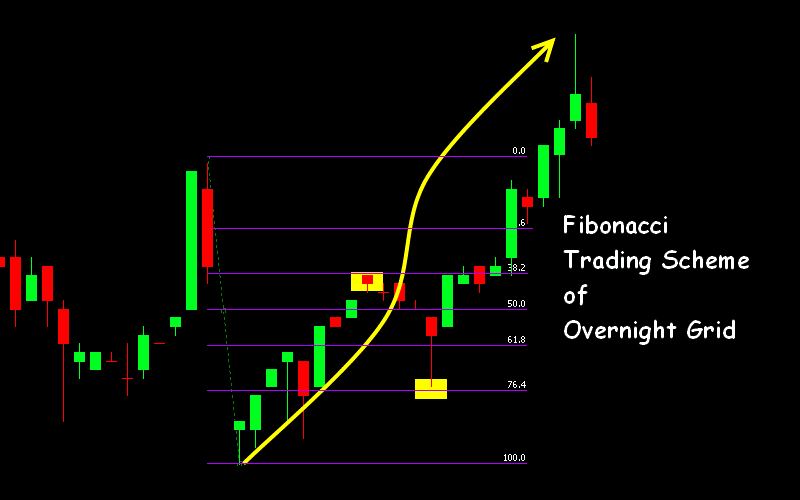 Fibonacci Forex strategy traditionally means that the first max/min is not the most optimum point to start setting up Fibo grid. It is recommended to find at least small double top or a double bottom in a zone where the current trend begins, and it is necessary to construct Fibo levels from the second key point. Accuracy of the levels constructed by such technique will be much higher. 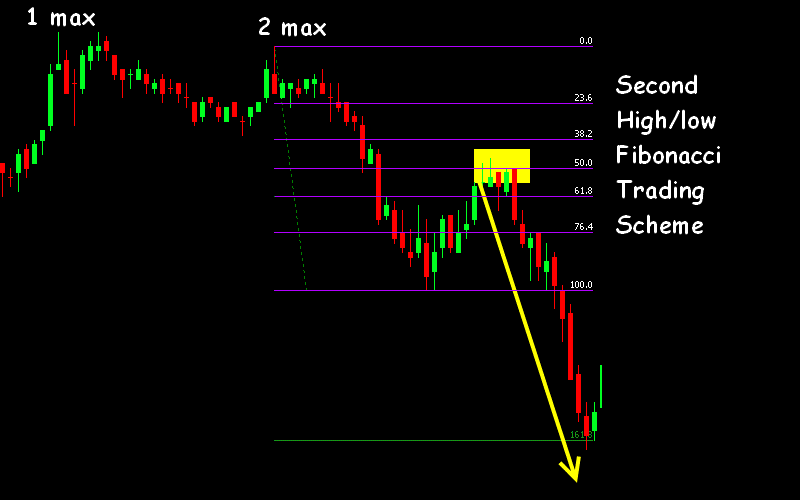 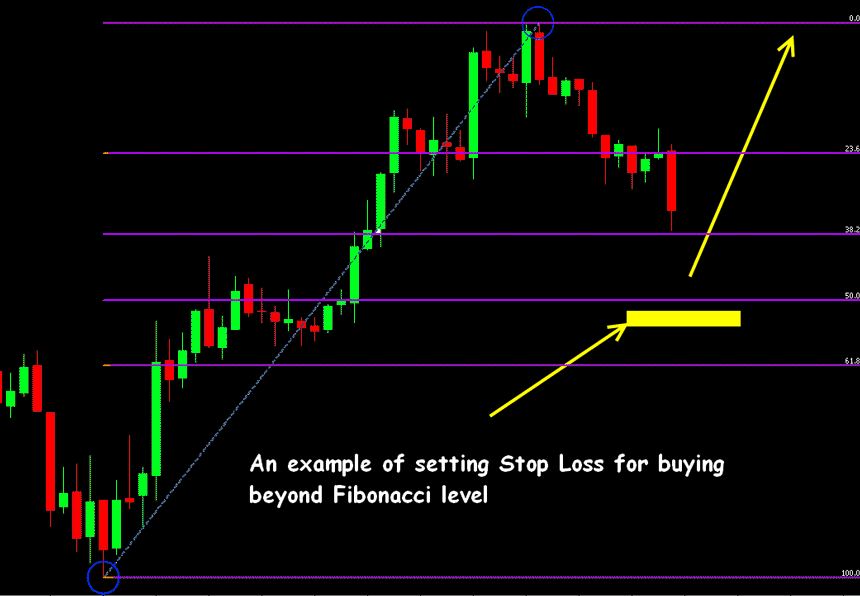 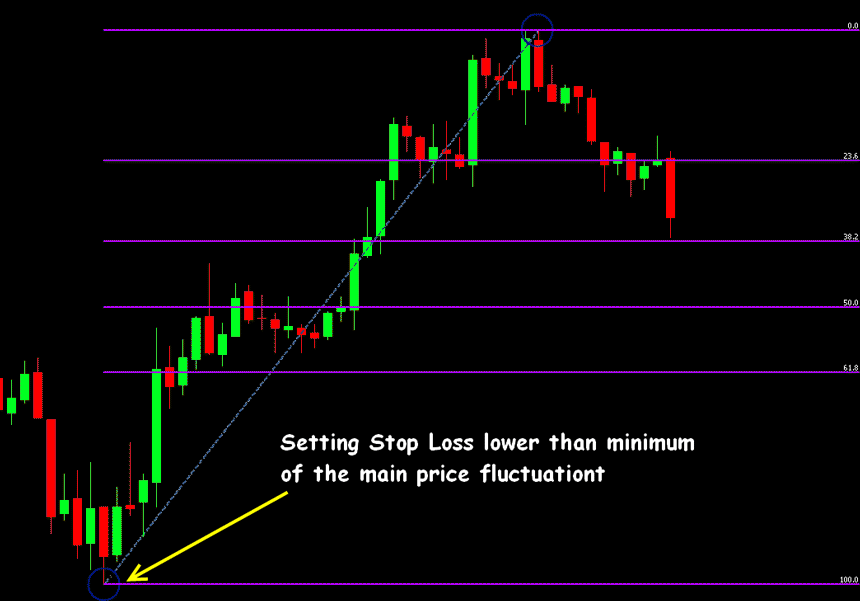 If the price after all punches such extremum, then under Fibonacci trading Forex strategy the previous trend must have ended and it is really necessary to close a position.

Availability and simplicity of application of Fibonacci strategy trading by the great number of traders has led to the fact that the huge number of players starts thinking similarly and carrying out same the same drawings, and, therefore, Fibo levels really become the strong support/resistance as the large trade volumes are concentrated on them.

Therefore, a breakdown or kickback from Fibo levels usually causes operation of a huge number of the postponed orders, and consequently it amounts to the signal capable to affect a general tendency. Any Fibonacci Forex trading strategy for the market trade shall consider that in the zone close to Fibo levels speculative price bounces can possibly happen in case of a sharp breakdown. It is recommended to wait until these bounces stop and open new positions only after the market direction is determined.

Fibonacci price levels are not always accurately adjusted, and, therefore, the mere fact of achievement by the price of such value is not the basis for an entry at all. Any Fibonacci trading system shall be applied only along with other elements of the technical analysis.