Hurricanes have left, Texas restores the volume of oil production and refining, the OPEC doesn't interfere with a situation.

BOE has kept rates; North Korea threatens again and shoots; the USA counts losses and prepares in a meeting of FRS.

The response of North Korea to the extension of economic sanctions, which covers about 90% of its export now, didn't become a shock for the market and has only for a while returned the interest of investors in Asian assets. Japan remains to the largest net - creditor, and therefore the risk of return of the capital to the «home» in case of escalation of the military-political conflicts forces investors to protect the profitable assets even in the conditions of strengthening of yen.

Not rockets or hurricanes, but new hope for acceptance of Trump`s tax reform in the current year was the main keynote of last week. The president has drawn the correct conclusions from failures and has turned on his favorable «regime of the negotiator»: he has a dinner in the company of leaders of democratic party with the purpose to involve them over tax reform. Republicans have published the new bill on reform of health care, but a deadline on it on September 30.

The way to real result remains difficult. Leaders of the Congress and administration of the White House promised to sound details of tax reform during a week since September 25, but last Thursday heads of the budgetary committees of both chambers have declared serious disagreements concerning rates of taxes, in particular, decrease in a corporate rate to 15% is considered impossible. Mnuchin unsuccessfully tried to save the situation, promising 20-25% as an option for a temporary truce, but the dollar will obviously be in demand before the publication of the plan for tax reform, especially to the solution of a question of a rate on repatriation of the capital. If instead of principles of the law on tax reform the next inconcrete declarations of intent are read again, the dollar will continue to fall actively.

While the dollar mainly rose in price against euro, participants of the market corrected the positions on dollar waiting for a meeting of FRS on September 20. The beginning of the reduction of balance won't be a surprise for the market and will lead to the growth of profitability of state treasury bills of the USA that is favorable for the growth of dollar. The start is expected on October 1 (by $6 billion purchases of state treasury bills of the USA, and by $4 billion mortgage bonds will decrease).

For the first time, FRS will announce the forecasts for 2020, but the bigger attention is deserved by changes in plans for year current. In a short-term reaction will depend on the prospects of an increase in a rate, forecasts for inflation and assessment of the influence of hurricanes on the growth of economy: inflation has already grown due to the growth of retail prices for gasoline because of hurricane Harvey consequences, industrial production decreases because of destructions. As a rule, a negative from natural disasters is short-term, and mitigation of consequences gives to the economy a serious impulse for growth. In the statement of FRS, the formulation about confidence in the achievement of the goal of inflation has to be kept.

We will remind: Yellen considers inflation delay a temporary phenomenon which won't interfere with gradual normalization of rates of FRS, but the statement of the Ministry of Finance of the USA Mnuchin for need of acceleration of growth is obviously addressed to FRS and personally to madam chairman with the direct instruction − abstention from further toughening of policy. So far Yellen is inclined to defend the independence of FRS, but it is improbable that Trump will be ready to renominate Yellen as the head of the Federal Reserve if the increase in a rate is postponed at least for a year.

Today in Germany the monthly report of Bundesbank will be represented. Before the German elections (on September 24), the lack of any terrorist attacks which can affect the opinion of opponents of migration policy is important. EUR/USD has been over bought technically long ago and now speculators who held purchases since summer, gradually leave the market. Though they have ceased to push up euro after the threshold of a national debt of the USA has been raised, prospects remain promising. Dynamics of eurocurrency after elections will depend about a month on the number of places of the Merkel`s party in parliament, or conditions of the coalition agreement (in the absence of the majority).

The pound has shown the most of the year in response to the publication of stronger than it was expected, inflationary data and falling of unemployment rate to the lowest level since 1975. About Brexit and delay of GDP growth of Great Britain up to 1,7% in the second quarter, the markets have forgotten long ago. Carney's statement with the next promises of toughening of regulation in the next months became the main catalyst. The probability of an increase in rates at a meeting on November 2 is already estimated at 75%.

The depth of technical kickback for GBP/USD will depend on retails data of Britain with the publication on Wednesday. Today Carney will perform with a lecture in the IMF headquarters in Washington, and on Friday we wait for Mai in Florence with a keynote speech in which, as expected, plans and a position of London on the transitional agreement and settlement of financial obligations of Britain to the EU will be stated.

China plans to forbid the trading in cryptocurrencies in domestic markets, off-exchange transactions are allowed. The decision on the closing of the largest crypto exchanges led to a powerful collapse of the market (almost for 22%), in 2 days $40 billion a market capitalization is lost, though the official instruction from the authorities of China about the closing of the auction did not arrive. Bitcoin fell 5 days in a row, BTC China does not open new accounts anymore. Political shakeup in management approaches and any probability of oscillations of a financial system shall be excluded.

Current week fans of Asian assets should trace the RBA protocol, the decision on a rate of BOJ and the Japanese index of activity in key branches, important data on China is not expected. Key data on the USA are published by the sector of the real estate, the production index of FRB of Philadelphia and preliminary PMI of the industry; on the Eurozone, we wait for inflation for August, the ZEW index of Germany and the all-European PMI. The plan insider for media in the form of the active performances of members of the ECB is possible, Draghi within a week will act three times: in Frankfurt on Thursday, and twice on Friday − in Ireland. In the form of the free conversation, euroQE abbreviation options can be discussed after the intermediate meeting of the ECB on the Wednesday and Thursday. 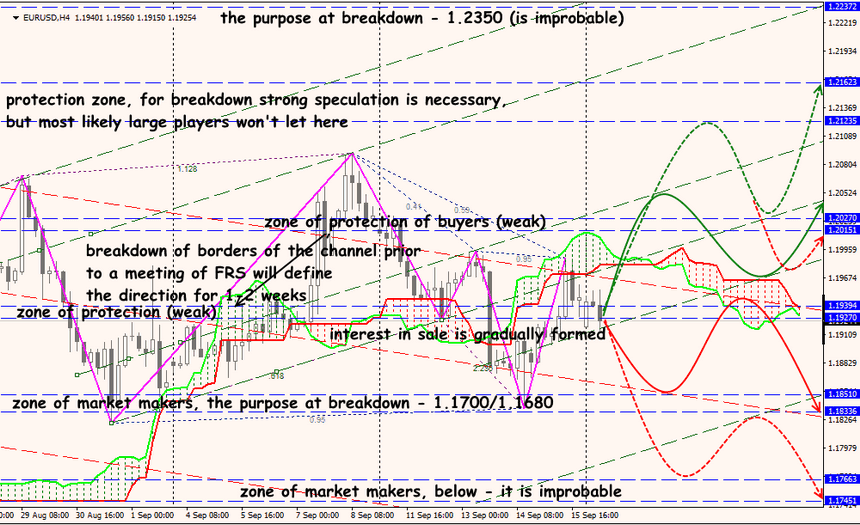