The meeting of FRS has led to the short-term growth of dollar.

For the first time May has suggested paying for maintenance of commercial relations with the EU; Germany has again chosen «mummy» Merkel.

Britain is ready to cover expenses on membership in the EU (€20 billion or $24 billion) up to two years after Brexit that is the most important point of the transaction. In exchange after March 2019, London will receive the transit tariffless period with the facilitated trade regulation. This is the first intervention of the prime minister in process of Brexit from the moment of the performance in London in January.

Acting in Florence, May has also offered more legal protection for citizens of the EU, has called for deep cooperation in safety and also has addressed directly politicians who have a real power to begin constructive trade negotiations. Investors have been disappointed and have sold sterling after her speech, having left royal currency vulnerable to further losses.

A rating downgrade of Britain by the Moody's agency after the closing of the trade on Friday completely leveled all positive; now dynamics of pound depends on the result of the next round of negotiations which opens today. On the Brexit the current week, it is also worth tracing Carney's performance on Thursday and the speech of the member of BOE of Broadbent on Friday.

As the power of the current team of the Federal Reserve System doesn't extend further 2017 that, in fact, all plans for rates are limited to a December meeting. FRS doesn't intend to stop reduction of reinvestments or to resume purchases of assets until all other tools aren't used. The decision to begin the process of reduction of balance in October has caused the strong movements in the market of treasury bonds, the curve of profitability of the treasures has begun to become clenched sharply. Yellen has confirmed that reduction of balance will happen according to plan and automatically, in case of delay of the economy the expectations of a further increase in rates can be reduced.

It is stated that last hurricanes will lead to a short-term slowdown in economic growth and to the failure report on the labor market for September, but won't change an economic trend in the medium term. Forecasts for GDP growth in 2017 have been raised to 2,4%; forecasts for inflation have been considerably lowered for 2017, but for 2018 decrease was small − up to 1,9%, in a long-term period − are kept at the level of 2,0% in a year.

Escalation of a wordy warfare of North Korea and the USA, which supports the sharp growth of rejection of risks in the markets and demand for safe assets, continues. The number of primary applications on unemployment has unexpectedly decreased on 23K, probably it is an overdue reaction to consequences of hurricanes. Of course, bad weather «has helped» to Trump with negotiations on a national debt that reduces the probability of new political collisions and gives hope for the realization of election pledges.

On the «Trump and K0» theme the planned announcement of details of tax reform, in particular, of rates of a corporate tax and repatriation of the capital will be the main event of the current week. If there aren't new details, it is worth expecting the closing of long of dollar. Also, the final attempt of the Senate on cancellation/replacement Obamacare is expected. Most probable date of statements there will be either September 27 or Trump's performance on September 29.

Advertizing campaign on an entertainment of the population of coffee from hands of the chancellor wasn't in vain: Merkel got the fourth term. On elections to the Bundestag her party didn't take the absolute majority, but won adequately (32%); now the structure of the government is a question of the effective coalition.

Against the background of a sharp drop in the rating Macron's party, most likely, will lose partial re-elections in the Senate of France – the president signed labor reform without coordination with parliament. On September 26 Macron intends to present the reforms of the EU/eurozone, but if it is only the offers on the creation of the European analog of the IMF, then euro will be strongly disappointed.

Sometimes the market is what it is seen by the technical analysis − operations of regulators absolutely precisely lead to a strengthening of dollar and depreciation of yen. BOJ has kept a key interest rate at the level of 0,1% and has continued buying up of state bonds of ¥80 trillion a year. At the same time the current key characteristics of the economy in Japan it is worse, than in the USA.

From other news we will note:

Current week final assessment of GDP growth, inflation of consumer expenses for August, the real estate sector`s data will be the main in the USA; on the Eurozone, we pay attention to the IFO index of Germany and data on the growth of inflation for September. It is worth listening to the Yellen`s statement on September 26 on weak inflation and new uncertainty in monetary policy and also Draghi − on Monday in Brussels and on Friday in Britain. 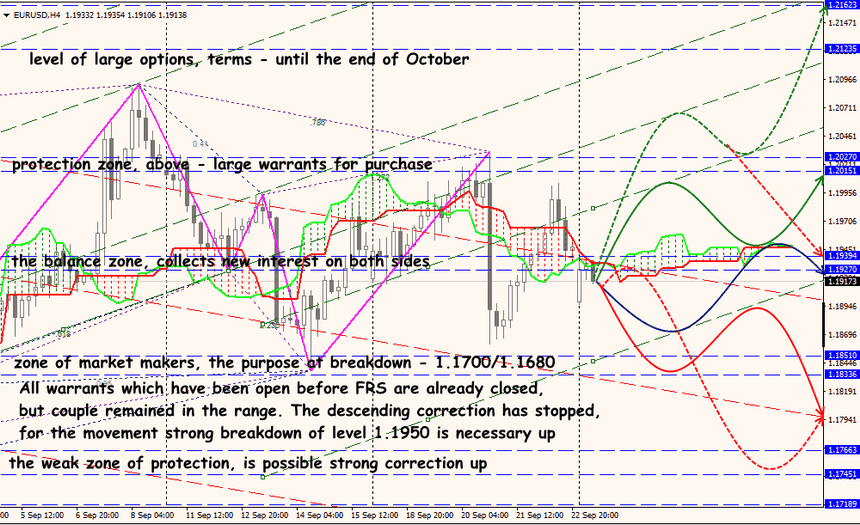 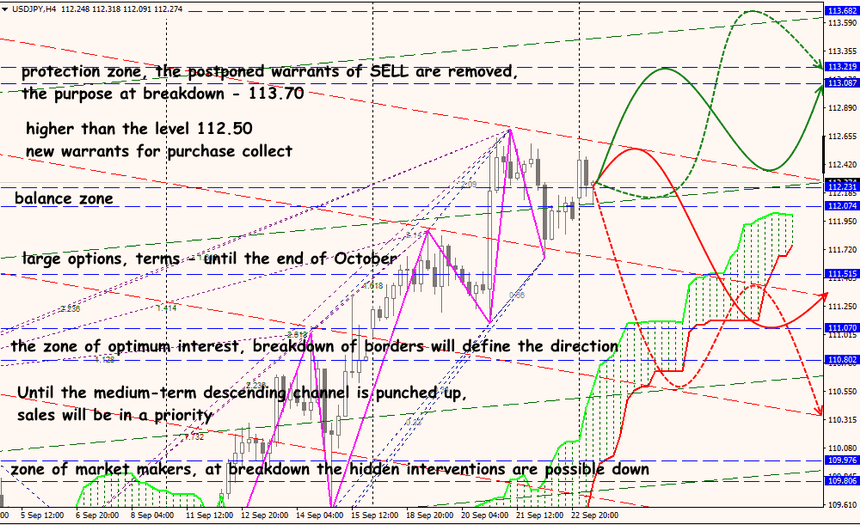